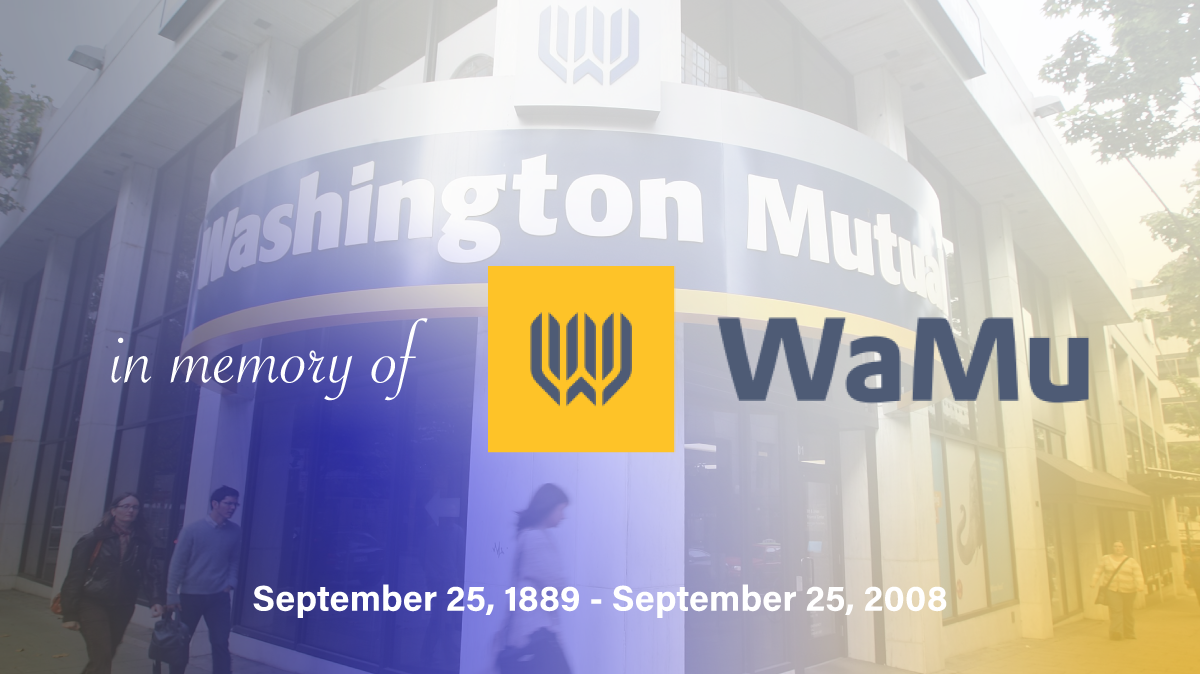 The Event that Helped Shape SLR

Yesterday was the anniversary of the largest bank failure in history. Ironically (or maybe not) WaMu was seized on its 119th birthday by the FDIC and ultimately 1.9 Billion dollars later, the banking operations (which included us ‘financial advisors’) were assumed by JP Morgan Chase. What was shock at first, morphed into an experiment in big business to ultimately spark the ideas that bring us to where we are today.

‘The Shock’
Imagine this: It’s late 2008, in the heart of the financial crisis and your the guy in the suit in the back corner of a WaMu bank. Your day job, is to sell investment advice as the financial advisor stationed in the branch. Big Problem: there’s a line out the door of people worrying about the safety of the money sitting in their bank account. Please, don’t underestimate the irony of this situation. The days and years before the financial crisis drama, investments offered through the bank were the risky things that came with the scary disclosures. I had to state in every presentation, “Investments may lose value, are not bank guaranteed and not FDIC insured”. The bank’s branch manager the only other guy in the institution looking like he has some authority physically swarmed by the ‘regulars’, you are forced to try to calm and explain to the rest. Sweet. How many people do you think came to us during that period to talk about ADDING to their portfolios? Maybe the introduction of a strong firm could bring some confidence and growth to my business… right?

‘Experiment In Big Business’
The dust settles, we emerge battle tested as Chase Financial Services representatives; well, what’s left of us anyway. Lots of casualties (not literally). Within the first year of Chase’s ‘assumption’ of WaMu, there was a mass exodus of former WaMu employees including a huge number of outgoing of advisors. Loyal and generally optimistic, I wanted to give JP Morgan a shot. After all, it’s JP Morgan and I’m in the business of finance. I felt the powerful name and the resources they could provide would provide value to my business. Besides, I had been in the same office loyally helping my ‘regulars’ there for years; I wanted to be the constant for them too. Despite my loyalty and what we thought was a good service to the people I served, the dose of ‘big business’ I got from Chase wasn’t what I had hoped it would be. I eventually learned if I wanted to really help my clients the way I wanted to, I had to move on. Over time, the culture and platform that lead to JP Morgan Chases’ powerful position in finance became the template to your business; like it or not. We were expected to conform. Nearly 4 years later, I moved on with my two friends and fellow advisors to create a firm together. We felt we could do it better, do more, and do it our way, and be THE GUY to our ‘regulars’.

'The Birth of our Independence’
SLR was formed when myself and two other former WaMu advisors, Steve and Brad, surprised our supervisor at a car dealership with our keys and laptops as he waited for his car to be serviced. The Northern California region of Chase lost 3 advisors spanning 3 counties on Friday 13th, 2012. That day we opened our doors we had a vision to create something better, built on our friendship, core values and various skillsets. Needless to say, JP Morgan did not appreciate our move but our clients found us despite their efforts to deter. We're not bitter, we moved on. But to this day we are still saddened by the good relationships we had with bank employees tainted, if not completely ruined, by a ‘pit em against one another’ corporate pay structure. The assets that found their way to SLR directly affected the paycheck of the colleagues and friends we were supporting for many years, tainting any success with some guilt.

Sure, the financial crisis of 2008 serves as a very pivotal event to the markets as a whole. To us WaMu advisors, the crisis played out full force in multiple angles. While helping the masses, we had employees crying on our shoulders looking for consolation and direction after their 401k allocation in WaMu stock was deemed worthless. It was our time to move on. We had a front row seat and some backstage passes to the effects of it’s demise, but I do still reflect on the times and relationships I built there and find myself missing the good ol’ times at WaMu.

Get Financial News & Updates Delivered to Your Inbox